The Marathon of Hope that never ends 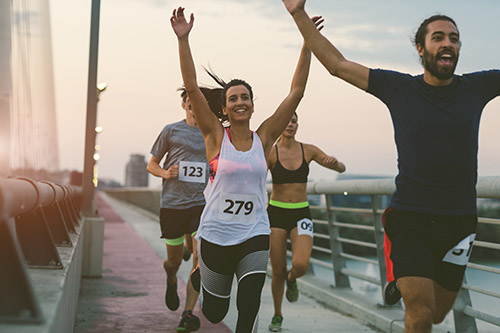 Just a few months before his 19th birthday in 1977, Simon Fraser University kinesiology student Terry Fox was diagnosed with osteosarcoma and learned he would lose most of his right leg to amputation.

In the 16 months of chemotherapy that followed his surgery, Terry met many other young people with cancer and became deeply aware of the limitations of treatment and the immensity of suffering caused by the disease.

He channeled his grief and frustration into action. Terry’s dream was to raise $1 for cancer research and awareness from each and every Canadian, a total of $24 million, by running from coast to coast. Between February 1979, when he announced his Marathon of Hope, and April 1980, when he dipped his prosthesis in the Atlantic in Newfoundland, the official start, he trained by running more than 5,000 kilometres. For 143 days after the official start, Terry ran an average of a marathon a day, a total of 5,373 kilometres.

Then Terry, his family and the country now cheering him on, received devastating news: The cancer had returned, metastasizing to his lungs. He had to fly back to B.C. immediately for treatment.

While his marathon came to an end that September day in 1980 and Terry died nine months later, his dreams did not. In 2016, the Terry Fox Foundation announced that more than $715 million had been raised in his name so far. And this year, people in more than 25 countries, including millions of school children, will participate in Terry Fox Runs around the world.

In the years since Terry’s diagnosis, research-driven advances in cancer treatment have dramatically changed the prognosis for people with the disease. Today, 80% of individuals diagnosed with osteosarcoma are expected to survive. In the United States, the American Cancer Society reported in 2016 that the combined death rate for men and women had fallen 23% by 2012 after peaking in 1991, the equivalent of more than 1.7 million lives saved.

Read: What you need to know about specialty drugs

Similar statistics aren’t available for Canada, but Canadian statistics do show a startling association between research investment and treatment advances. Lung cancer causes 26% of deaths in Canada and is the focus of 6% of research funding; breast cancer accounts for 7% of Canadian deaths and 26% of research funding. While lung cancer survival rates have stayed almost the same for the past 25 years, 44% fewer women die of breast cancer today than they did in the late 1980s. That is despite an aging population leading to more breast cancer cases overall. The moral of the story: Fundraising and research make a difference!

Researchers and fundraisers are hard at work continuing this legacy of hope, and they are not alone – employers play an important role in making new treatments available to the people who need them. The reality faced by many Canadians diagnosed with cancer, however, is that these new life-saving drugs often come with astronomically high price tags.

According to the Express Scripts Canada 2016 Drug Trend Report, spending on cancer medications grew by double-digits in 2016 alone, and cancer treatments dominate the list of new drugs in the development and approval stages. That means more help is on the way for cancer patients, but also that the cost pressures will continue to mount.

In response, forward-thinking employers that want to safeguard access to these and other critical treatments for their employees, today and in the future, are increasingly adopting new drug plan management strategies. These strategies aim to optimize health outcomes, while controlling costs.

For cancer patients and their families, the future is always uncertain, but thanks to the bravery and commitment of Terry Fox, among others, the future is brighter than it’s ever been, and Terry’s vision is coming true: Today, there is hope!